John:  Let’s turn back to science this month, okay?

Maggie: Perfect.  I was just thinking the same thing.  Last time we discussed science we covered Kepler, the mathematical genius.  Who’s next?

John:  Yes, that is one way of putting it.  He is the telescope guy.  He is also famous for his fights with the Catholic Church and his observations of the planets and stars.

Maggie:  I know.  I was just kidding.

Let’s get the basic facts out of the way quickly before we get into the cool stuff.  Okay?

It is always nice to put dates to an astronomer, but not so important that you need to memorize them. So just for reference, Galileo was born in 1564 and he died in 1642.  But here is something that is interesting.  In 1581, when he was just 17, he became a medical student at the University of Pisa.

Maggie:  Did he become a practicing doctor?

John:  Oh no.  He really disliked medicine.  So after four long years, he returned to Florence where he grew up and started intense studies in mathematics.

Maggie:  He must of really hated medicine to give it up after all that time spent in school.

John:  Yes, he did.  But on the other hand, he loved math and was really good at it. In fact, in 1589 he became a professor of mathematics at the university he had left just four years earlier. And then in 1592 he moved to a similar math position at the university in Padua because it paid better.

Maggie:  When did he become an astronomer?

John:  While he was teaching at Padua.  He was working on an explanation for the tides when he discovered Copernicus’s theories, and these really excited him. But he wasn’t completely convinced that Copernicus was correct until he developed the telescope and was able to observe the planets and the stars in more detail.

Maggie:  Wait, wait, wait…  What happened to Kepler?   Why is Galileo jumping all the way back to Copernicus?

John:  That, my young friend, is a great question. Kepler was so smart and such a great mathematician that at times he was his own worst enemy.

John:  Remember what we said about Kepler, that his books were filled with multi-complex math?

Maggie:  Sure.  He brain-shredded numbers like no one else.

John:  Well, not a lot of people had the patience to work through Kepler’s calculations.  And it is surmised that Galileo was one of them.  So rather than breaking it down, he turned to Copernicus.

Maggie:  His loss I guess.

John:  But also our gain because it left Galileo time to work on telescopes.

Maggie:  Tell me more about that.

John:  In 1609, Galileo heard that some people in Holland were placing two pieces of curved glass inside tubes to see longer distances.  So he decided to test this theory.  Because he was such a mechanical and mathematical wizard, he came up with his own version of the telescope that same year.  And he kept improving on it until he could see further and further distances. 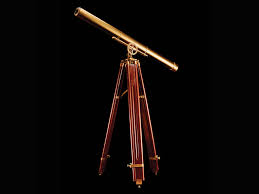 Maggie:  Did he get big bucks for the invention?

John:  Sort of.  In 1610, because of the telescope, he was offered a lifetime job working as a mathematician for the Duke of Tuscan.  It paid a lot more money, so he accepted the job and moved back to Florence.

John: Right.  He held this position for the rest of his life.

Maggie:  Didn’t he make some great discoveries with his telescopes?

John:  Yes he did.  He made some significant advancements in astronomy through observation, furthering the heliocentric view of the universe.

Maggie:  I love the fact that he used his telescopes to prove the Copernican model, but I got to give some credit to Kepler.

John:  Me too.  Kepler made some great advances on Copernicus’s theory that Galileo ignored.  But here is something that is really cool.  Galileo set the stage for modern astronomy, which still uses the mathematical-physics approach, but also verifies theories through intense observation just like Galileo did.  It’s so cool how astronomy advances.

Maggie:  Yeah, it is.  Why don’t you tell me about some of the things Galileo saw through his telescopes.  What did he discover? 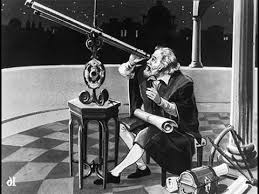 John:  One of the first things he discovered was that it wasn’t only the Earth that had a moon revolving around it, Jupiter did too.  In fact Galileo was the first western scientist to observe four of Jupiter’s moons.  This was mind blowing at that time because it showed that another planet was similar to Earth, which suggested that the Earth was not as special as previous scientists and theologians had thought.

Maggie:  That had to make some people mad.

In addition to Jupiter, Galileo also started looking at the moon.  If you remember our discussion of the ancient astronomers, Aristotle thought that the heavenly objects were perfect, including being perfectly spherical.

John:  Well, Galileo discovered that the surface of the moon was just like the Earth’s surface, filled with mountains and valleys and craters.  Again, he was showing that all the planets and moons were similar.

As time went on, he also observed that the Sun (a longtime symbol of perfection) was actually full of spots and unevenness.  And Saturn appeared to have an appendage around it, which would later turn out to be the rings of Saturn.

Maggie:  So he basically discovered that the planets, moon, and sun were not perfect as previously thought.

John:  Good summary.  By using observation he confirmed the heliocentric model and he showed conclusively that the universe was not perfect.  I know this seems commonplace nowadays, but back then it rocked the scientific and theological communities.

Maggie:  And it got him in trouble with the church, right?

John:  Exactly right.  In 1632, he published his famous book Dialogue on the Two Great World Systems, which compares the Ptolemaic and Copernican systems.  It explains why Copernicus’s model was better and it uses the evidence he discovered with his telescopes to prove it.

Maggie:  What happened to Galileo?

John:  The church went nuts because it was still clinging to the old Aristotelian cosmology, and charged Galileo with disobedience.  Remember now, this is the time of the Roman inquisition, so Galileo was terrified. 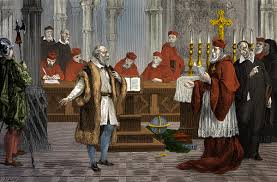 Maggie:  What did Galileo do when he found out the charges?

John:  Instead of facing torture and possible death, he abjured.

John:  It’s such a cool word: he abjured.  He solemnly renounced his belief in Copernicus’s model.

Maggie:  That is a cool word.  Did the church let him off the hook when he did that?

John:  No, unfortunately not.  The church placed him under house arrest for the remainder of his life.

Maggie:  I know this sounds harsh, but that just seems so stupid.

John:  It does now, but I don’t think we should judge the past based on present knowledge or present notions of morality.  That doesn’t get us anywhere.

But do you want to hear a theory about Galileo’s trial that I think is correct?

John:  Remember I told you that Galileo didn’t want to take the time to master Kepler’s math?  Well, had he done so he would have had a formidable weapon to use in his defense against the charges of the Church.  Think about this: it is hard to argue with the logic of pure math and it was Aristotle himself, the church’s highly regarded philosopher, that lauded such logical reasoning.  But for whatever reason, Galileo didn’t grapple with Kepler’s theories, so he didn’t have them as a defensive tool.

Maggie:  That’s okay.  It turned out well enough in the end because Galileo lived on, even if under house arrest, and he still proved by the use of his telescopes that Copernicus was right.  The galaxy is really heliocentric.

And that my friend is a great summary of Galileo’s contributions to astronomy.  So we will end the conversation here.