Maggie:  What time period are we discussing today in our continuing conversation about the history of astronomy?

John:  Wow, that is a very formal question.

Maggie:  I am trying to provide a good introduction for the blog.  What do you think?

John:  It’s wonderful.  And to answer your question, we are discussing ancient Greek astronomy. We will start with Thales and end with Aristotle.

Maggie:  Okay. But before we talk about the specific astronomers, are there any general ideas about ancient Greek astronomy that I should know?

John:  Good question.  And the answer is yes.  Ancient Greek astronomy is significant because it is the first time that astronomers (also called philosophers at this point in history) moved from coming to conclusions based on their simple observations to actually using mathematics and geometry to develop models of the universe.  A simpler way to say this is that astronomy became a real science under the Greeks, who first used mathematical and geometrical models and hypotheses to help explain the workings of the universe.  And that is pretty cool, my young friend.

Maggie:  That is pretty cool.  So tell me, who is Thales?

John:  He was the first person in recorded history to predict a solar eclipse, which occurred in 585 B.C.E.  That is what he is most famous for.  But that is not the only reason why you are going to love him.

Thales was a bit of a nerd.  Plato told a funny story about him.  It seems that Thales was so enthralled with the planets and stars that he would walk around staring at the sky.  One day when he was out walking, and looking up when he should have been looking down, he accidently fell into a well and had to be rescued.

Maggie:  That is hilarious.  He was a total science nerd!  Funny.  What else did he discover?

John:  Thales also believed that there was one basic element that was the same in everything in the universe.  In other words, everything we sense has this one element in it.  What do you think it is?

Maggie:  I have no idea.

John:  Look around and think about the things you see immediately around you.  What is one thing that is in all of these things?

Maggie:  Okay.  I see trees and grass and a hedge and a dog and you.   Let me think about this.  (Pause)

The only thing that I can think of is that they all have to drink water or they will die. So water is my answer.

John:  And you are correct.  Thales did exactly what you just did.  He observed the universe around him and concluded that the one element that is in everything is water.  It is more prevalent in some things than in others, but it is the prime element, he thought.

If we think about it, like you and Thales did, we can sort of understand how he came to this conclusion.

Maggie:  Why is this important to astronomy?

John:  For this reason: Thales changed the way science was being done in Greece.  He came to believe that the universe was in fact intelligible.  So instead of turning to mythology or religion to explain his observations, as his predecessors had done, he went looking for natural explanations to his questions about the universe.  This is a whole new method that affected future astronomers and scientists.

Maggie:  Okay, that is cool.  And you are right, I like Thales.  Who is next?

John:  A gentleman named Anaximander. He lived approximately 610 to 545 B.C.E.

Anaximander is famous for a couple of things.  He introduced the sundial to Greece, which he likely got from Babylon. He also was the first Greek to draw a map of the entire earth.

Maggie:  Okay, but what about his contribution to astronomy?

John:  Remember that Thales thought that the primary component of the universe was water?

John:  Anaximander expanded on that notion.  He believed that the cosmos was made up of four basic elements: earth, water, air, and fire.

Let’s draw a mind-picture to explain this.  Picture yourself at the very center of everything.  You are standing on dry ground.  Another word for this is earth.  Now what surrounds the earth that you are standing on?

Maggie:  When I look around, I see that the earth I am standing on is surrounded by water, also called the oceans or seas.

John:  And what surrounds both the earth and the seas?

Maggie:  The sky, which I suppose is also called air.

John:  Right!  And when you look beyond the sky what do you see?

Maggie:  The sun and the stars.  Oh oh, I get it.  These are lights, so you could also call them fire.  Yes yes yes, it all makes sense now. The primary elements are earth, water, air, and fire.

John:  Again, right!  And Anaximander believed that the cosmos is characterized by ceaseless alterations in the relationships of these primary elements.  Water evaporates and is drawn into the air by the heat of the fire.  This leaves the earth dry.  The water returns as rain, along with the fire in the form of lightening. And you can use your imagination for the rest.

Maggie:  Okay that is weird, but why is this important to us?

John:  We have to remember that Apeiron was not an observable substance to Anaximander.  It was inferred in order to explain change in the universe.  Anaximander used logical hypotheses to explain the universe, including the existence of the sun and stars.  In other words, he was doing science, advancing the hypotheses of Thales.

Other Greek scientists and philosophers would advance the use of reason in explaining the universe, like Anaximenes and Xenophanes.  But the next person that is important for our purposes is Pythagoras.

John:  Yes, exactly.  What can you tell me about him?

Maggie:  Not much.  Pythagoras became famous for making advances in mathematics, like the Pythagorean theorem.

John:  Yes!  He also made advances in astronomy.  The Pythagoreans were a religious cult that came to believe that the universe had a rational order to it, and that order existed in mathematical relationships. By figuring out what these relationships are, a person could figure out the meaning of the universe.

Maggie:  You are going to explain why this is important, right?

John:  Why don’t you use your brain and tell me why it is important?

Maggie: Me and my big mouth!  Okay, I will take a shot at it.  It is important for two reasons.  First, just like Thales and Anaximander, Pythagoras is using reason to explain the universe.  Second…  Oh, I got nothing.  Anything else?

John:  Nice effort.  And yes there is a second point. Pythagoras believed that the universe had a rational order to it.  This belief would permeate astronomy and physics all the way through the middle ages.

Maggie:  I get it.  After Pythagoras, scientists were always looking for orderly explanations for things they observed in the universe.

John:  That is a perfect way to say it. And this brings us to the last person we will discuss in ancient Greek astronomy: Aristotle.

John:  That is true.  Aristotle was the greatest thinker to ever live and his astronomy still remains fascinating today.

Maggie:  What is the most important thing we need to remember about him?

John:  You are always asking such great questions.

Maggie:  As you always say, the question is the most important part of learning, so I try.

John:  We must always keep in mind that Aristotle was first and foremost a natural philosopher.  He was always looking around him and trying to come up with common sense reasons to explain why things were the way they were.  So when he turned to science, he looked for scientific explanations that supported what he considered to be self-evident through observation.

Maggie:  Can you give an example of this?

John:  Sure.  Like Pythagoras, Aristotle loved the certainty of mathematics and its rational explanations of the universe.  But he wanted more.  It wasn’t enough to have a mathematical model, Aristotle required that the model also agree with his observations of the universe.  In other words, he loved rational explanations, but reason could not circumvent Aristotle’s common sense observations.  Rather, he believed, reason provided a greater explanation of what was also observed in nature.

Maggie:  So he went beyond the previous astronomers and combined scientific reasoning with his observations. Using both.

John:  As always, you say it in a more simple and cleaner way than I ever could.

Maggie:  Thanks.  So what did he believe about the universe? 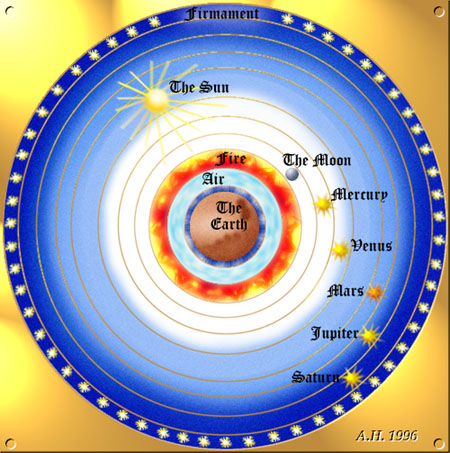 John:  Take a look at the two pictures above.

First, he believed that the earth was at the center of the universe, and that it is at perfect rest.  He came to this conclusion through observing the stars in the sky.  He observed that when a person is in the northern hemisphere, one-half of the stars are visible. And when a person is in the southern hemisphere, the other half is visible.  And these star patterns never change.  The only way that this is possible, he concluded, was if the earth was fixed and unmoving, and at the center of the cosmos.  (The stars are also fixed, but we will discuss that in just a second.)

Maggie:  That is interesting, because he is combining logical reasoning with observation, like you said.

Maggie:  And it looks like he borrowed from Anaximander.

But he also had to explain the motions of the planets, so he said that they revolved around the earth in perfect, concentric circles.  And above the planets was the last circle, which held the stars. The stars, like the earth, were fixed in place, unmoving.  And now this is where it gets weird.

Aristotle also believed that the cosmos was bounded.

Maggie:  What does that mean?

John:  Some people today believe that the universe if infinitely large.  But this was impossible, according to Aristotle.

To better explain this, we have to understand what Aristotle means by the term “place.”  According to Aristotle, place is not a point in space.  For example, a person cannot point to a spot on a table and say that a glass sitting on the table occupies that particular place.  In order to understand where the glass is located, we have to understand the boundaries that surround the place.  In our example, the table makes up the boundaries for the glass, giving it location.  Therefore, saying that the glass is on the table means that the glass exists within the borders made up by the table.

Maggie:  Let me try another example.  Saying that the soccer players are on the field is only meaningful because we understand the boundaries made up by the field.

John:  You really impress me sometimes.

Continuing our reasoning, Aristotle believed that place is located by the things which bound it.  So without boundaries, there can be no place.  Does that make sense so far?

Maggie:  That seems a little dodgy, but I can’t really identify why.

John:  It is wrong, we know now, but at the time it was cutting edge reasoning. And it is reasoning that would stay with western astronomers until the Renaissance.

Maggie:  And it is important because it combined both empiricism and rationalism?

John:  Right, and nice use of the new terms.

Maggie:  And I really like his definition of place.  It is very cool.  Is that it for Aristotle?

John:  Yes.  Next time we will chat about Hellenistic astronomy and Ptolemy.

Maggie:  This has been great.  Thanks.

One thought on “Maggie and Me (a philosophical dialogue): Ancient Greek Astronomy”